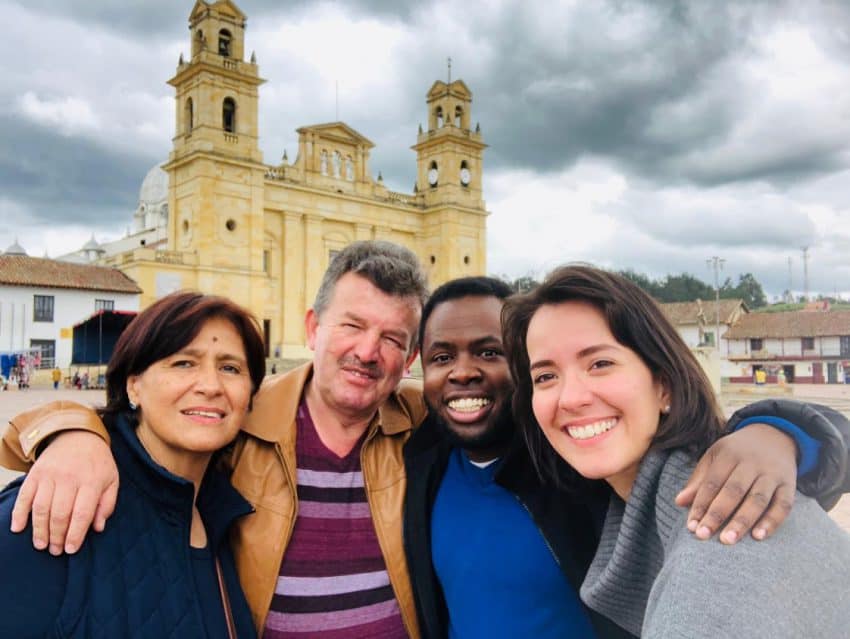 The Basilica of Our Lady of the Rosary of Chiquinquirá is one of the most cherished sacred places in Colombia.[1],[2] The Basilica is home to a 16th century Marian painting known as “The Virgin of Chiquinquirá” which became famous throughout the country for its miraculous restoration after being damaged a few years after it was composed in 1560.[1],[3] Tradition holds that a pious woman named María Ramos spent many days praying before the image, asking that the Virgin Mary reveal herself in all her heavenly beauty, and finally in the year 1586 on Friday, December 26th at 9am a radiant beam of light emanated from the Virgin in the painting, illuminating the whole of the chapel.[1],[3] Filled with awe, shock, and fear María Ramos began to cry before the spectacle, and threw herself at the feet of the altar.[3] When she glanced back at the painting she noticed that it had been mysteriously restored from the damage it had suffered, looking almost brand-new, except for some small holes that remained.[1],[3] News of this incident quickly spread throughout the surrounding neighborhoods and the image began to be venerated.[3]

The Catholic Church began construction of the Basilica which houses the sacred image in 1801, but it took a full 120 years to be completed.[4] Over the years, the image has played a special role in the history of Colombia.[1],[3],[4] Simón Bolívar, the great general who led the armies of Gran Colombia (modern day Colombia, Venezuela, Panama, and Ecuador) to victory over the Spanish in the war for independence, prayed before the image for the first time in 1821, and returned to the sanctuary over a period of years for purposes of adoration, thanksgiving, and supplication.[3],[5] In 1829, Pope Pius VII declared the image the Patroness of Colombia and ordered a liturgical feast to celebrate the occasion.[1] In January of 1910, Pope Pius X gave a canonical coronation to the image, which made the title “Virgin of Chiquinquirá” official, and in 1919 the image was taken to Bogotá where it was designated the Queen and Patroness of Colombia in one of the most solemn acts of piety in the history of the country.[1],[3],[4] In the 21st century in 2008, then President Alvaro Uribe credited the image with helping him avoid an armed conflict with Venezuela and Ecuador.[1] He had prayed the rosary with all the government officials present at the Presidential Palace, dedicating the prayer for peace to the Virgin of Chiquinquirá, and days later, he shook hands in peace with the presidents of Venezuela and Ecuador, and they agreed to restore diplomatic relations with Colombia.[1]

To this day, the sacred image and the Basilica are a major attraction for both Colombians and foreign pilgrims throughout the world.[6] Locals and tourists come to enjoy Mass at the Basilica, take photos of the historic painting of the Virgin, which is still on display right above the altar, and enjoy the church with its captivating neoclassical architecture, as well as the surrounding shops, restaurants, and historical sites.[6]

The car ride was very long but enjoyable at the same time. It’s a 3-hour drive from Bogotá to Chiquinquirá, and we left early in the morning at 7am to maximize time to go to Mass, eat, and go site seeing. Mariangela and I had been up late the night before partying at Andrés D.C. with another friend, so I was a bit groggy that morning, especially since I didn’t have time to eat breakfast. For those reasons, I decided to do more listening during the car ride and take pictures of the verdant pastures outside the car window. I was surprised how lucid Mariangela was considering she had been up just as late as I had been. She spent a good portion of the car ride talking with Juan’s parents about the history and current state of Latin American politics in Colombia, Venezuela, and her home country of Nicaragua. I was impressed by her knowledge of national and international politics in so many different regions in the world. Before we arrived, we made a quick road stop to grab some arepas and hot chocolate.

The Basilica is a wonderous sight to behold, with more than 30,000 square feet of illustrious neoclassical architecture.[2] The imposing pillars sustain the dome overhead, which stands 82 feet above the ground.[2] In addition, there are 15 small chapels within the Church which correspond to the 15 mysteries of the Rosary.[2] The nave is also very long, and walking from the front door to the altar felt like a small journey. Above the altar, the original image of the Virgin of Chiquinquirá from the 16th century is positioned prominently, front and center stage, adorned on each side by gold plated pillars.[2] Here’s a picture I snapped of the painting:

And here’s a picture of me in front of the altar:

As soon as we entered the Church, I remember seeing Mariangela cover her mouth and look with bewilderment at the altar. I didn’t think much of it at first, so I just went ahead with Fernando to take various pictures around the Basilica. But as I was coming back into the main nave from one of the side passages, I noticed that Mariangela was on her knees, seeming to be in distress. Juan’s mom Marta was by her side comforting her. Fernando and I went over to see what was going on, and Marta said that Mariangela was going to be okay and just needed a little space. About 15 minutes later, Mariangela explained to us that she had seen a vision of the Virgin Mary, and had not been able to speak since she had entered the Church. She explained it was the first time something seemingly supernatural had happened to her, and that she had become overwhelmed with the waves of emotion that were flooding through her, even to the point of tears.

For me, it was surreal listening to her testimony. It was the first time I had stood next to someone I knew was totally sane and rational giving an account of something inexplicable happening to them right before my eyes. She said it was the first time anything of a supernatural nature had happened to her, and that she had never ever felt the need for any kind of supernatural religious experience to believe in all the truths of the Catholic faith, so she was startled that something like this would happen so suddenly. Reflecting on her words made me think about the history of Marian apparitions throughout the world, and specifically the purported miraculous manifestations associated with the Virgin of Chiquinquirá throughout history. Perhaps, I thought, God sprinkles unexplainable events in the course of human affairs to force us to confront the disquieting truth that our individual experiences suggest to us a realm of inaccessible phenomena undergirding reality; even in the subjective experiences of our friends and family we come into contact with the inscrutable, that which we will never be able to fully investigate even if we could run a thousand experiments over and over again, and we will simply have to take a small step, even a leap, into the dark if we want to create a coherent picture of reality that captures the full human experience.

Right outside the Basilica there is a square called “La Plaza de la Libertad.”[6],[7] In the center is a sculpture of the young Simón Bolívar and in the surrounding plaza there are hotels, shops, and restaurants architected in the colonial style of the 19th century.[6],[7] There is also a beautiful walkway around the corner called “La Calle Peatonal” (Spanish for “Pedestrian Walkway”).[6] This street is surrounded by arts and crafts shops and houses all in colonial style.[6] Here’s a group selfie that Mariangela took of us on the walkway:

After continuing down the street and checking out a few of the arts and crafts shops, we stumbled upon a church building and decided to go inside. We walked down a narrow passageway that felt like a small cave, surrounded on each side by faded gray bricks that seemed to have been placed there ages ago. After we came out of the tunnel, we came to a small, circular room with a well in the center. I gazed up at the sign behind the well, and I came to understand that we were at the very site where the famous painting “The Virgin of Chiquinquirá” was miraculously restored in 1586.[8] Here’s a picture I snapped of that sign etched in stone:

The sign describes how the well came about as a result of digging at the site done by pilgrims centuries ago. The water within the well has been certified to be very pure, and it is used by hundreds of pilgrims from across the world as a religious relic for use in baptisms and sacramental blessings.[8] I ran my hands around the perimeter of the well, and felt honored to have the opportunity to stand where such an important event to the Colombian people had taken place. I stood on the same ground that María Ramos had knelt upon almost half a millennium ago, and I felt a sense of solidarity with the Colombian piety that permeated the place.

After leaving the circular room, we came to the altar in the main section of the Church where there were angelic figures that surrounded a nativity picture. I felt a deep sense of reverence as I gazed up at the scores of ornate gold stars in the background, and then down at the lush bouquets of flowers below, and then back to the painting in the middle. Here is a picture I snapped at the altar:

I didn’t know it at the time, but the Church is called “La Igelsia de la Renovación” (“Restoration Church” in English) or “La Parroquia de la Renovación” (“Restoration Parish” in English).[8] It is located in Julio Flórez park right around the corner from the Basilica of Chiquinquirá.[8] The park is also full of small shops and is noted as a great place to buy emeralds.[9]

Eating in the Plaza

After leaving La Igelsia de la Renovación, our feet were tired from all the walking around and our stomachs were growling from all the hours without food. We came back to the center of La Plaza de la Libertad and chose a restaurant that served homemade style traditional Colombian food – soups, arepas, rice, all the works. Here we had a chance to reflect on the day and make some small talk with the friendly staff. Our waitress was curious to know where we were all from, as she could make out several different accents at our table. We had me from New York, Fernando and Marta from Bogotá, and Mariangela from Nicaragua. It was enjoyable to share my own background and hear more from everyone at the table about their own life history. A funny moment that still comes to mind from that day was the struggle I had cutting the meat I had ordered, and how Fernando jumped in to help me cut it so I could finish my meal faster (to this day it seems I’m always the slowest eater). Here’s a picture of that bit of help I received:

After I finished eating, we walked back to the car and set about the journey home. It had been a long day and a very fulfilling, reverential adventure.

More pictures of this trip can be viewed at https://photos.app.goo.gl/JuSUfiVg4Lm3kBTG6