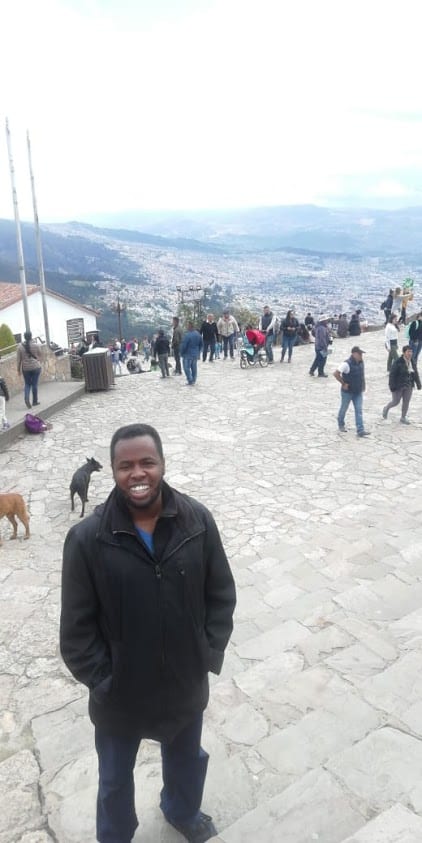 Monserrate is an essential tourist destination for anyone visiting Bogotá. It is arguably the most popular site, attracting over 2 million visitors every year, and over 100,000 visitors during Holy Week.[1][2][3] It is a hill that towers over the city center of Bogotá, with a peak altitude of 3,152 meters, or 10,341 feet, and it is most noted for the Church at the top which has a shrine dedicated to a devotional statue of Jesus Christ known as “El Señor Caído”.[1] The Church and statue were constructed in the 17th century at the behest of a religious group known as the Brotherhood of Vera Cruz.[4] This occurred during the Colonial period in which the Spanish replaced indigenous religious temples with Catholic parishes.[1] Even before the Spanish arrived, the hill was already considered sacred by the indigenous Muisca tribe, principally because the sun would rise directly above the hill during the June Solstice and the sun represented the solar god Sué in the Muisca religion.[1] When the Brotherhood of Vera Cruz established the new religious retreat at the top of the hill, they named it Monserrate in honor of the Morena Virgin of Monserrat in Catalonia.[1][4] The devotional statue of Jesus Christ was originally affixed to a Cross, but was eventually taken down and then became known as “The Fallen Lord” or in Spanish “El Señor Caído.”[1] Over the centuries, increasing numbers of Catholic faithful came to the mountain to see The Fallen Lord rather than the sculpture of the Virgin of Monserrat, which finally culminated in the moment in the 19th century when The Fallen Lord replaced the sculpture of the Virgin of Monserrat as the centerpiece of the sanctuary. From then on, the mountain became known as Monserrate. To this day, tourists, travelers, and both local and international Christian faithful come to Monserrate to see the Fallen Lord, go to Mass, offer up prayers, and enjoy one of the most scenic views that Colombia has to offer.[1]

We arrived at about 10am on Tuesday, April 16th and were immediately concerned that we might have arrived too late to make it to Mass at the top of the mountain. Fernando and Marta thought the lines wouldn’t be too long since it was a Tuesday, even though it was during Holy Week, but they wound up being surprised by the turnout. While Fernando went to park the car, Marta and I went to wait in line so we could get tickets for the 3 of us as soon as possible. It was all too fitting that the line began at a stone cross at the top of the ramp where you can see the truck coming down in the picture above. Here’s a picture of where we were standing:

As Marta and I waited in line a Colombian child pointed at me and asked her “Where is he from?” I guess my accent or my clothing made it dead obvious I was a foreigner. I interjected and made small talk with the kid while we waited for Fernando. When he joined us after about 20 minutes, we wound up spending a full 2 hours in line before we got to purchase our tickets. Here’s a picture of the place in line right before the ticket booth:

Going up the funicular railway

As you might guess by the name, the funicular is a lot of fun to go up

. It was first opened in 1929 and offers a slow, tranquil ascent to the top of the mountain, leaving plenty of opportunities to take pictures and videos of some of the most verdant pastures Bogotá has to offer. It’s also a great place to listen to the harmonious chirps of birds that are found in the mountain year-round.[5] Here’s a short video of us ascending the mountain from start to finish in the funicular:

When you get to the mountaintop, one of the first things you notice is a breathtaking walking path full of trees and statues. It is a beautiful representation of the Stations of the Cross, a series of devotional images that depict Jesus Christ on the day of his crucifixion. Here’s a picture of me in front of one of the stations:

Of course, you also get a view of the illustrious Church at the top of the mountain. Thankfully, we had enough time to take pictures and attend afternoon Mass. A funny story that happened that day was the disaster Marta and I had trying to confess for Holy Week at the beginning of the afternoon service. All Catholics are encouraged to go to confession during Holy Week, so we thought now would be a good time before good Friday and Easter. When we got to the line there were only a couple of people in front of us, and one man in the process of confessing to the priest so it looked like we’d be good to go within a few minutes. To our dismay, however, that few minutes turned into 20 minutes while that same man was still in the booth confessing his sins. This is actually a major cultural difference between Catholic practice in Colombia and in the United States. In the US, people walk into the confessional already knowing what they’re going to confess and tend to be very quick about the process. A line of 20-30 people can be accommodated within an hour long Mass. In Colombia, however, people often take 15 to 20 minutes to confess their sins even if there is a long line of people waiting. Months later when I moved to Medellin, I asked a friend about this phenomenon and he told me that in Colombia people often treat the priest like a psychologist and are asking for life advice more than forgiveness and, sometimes, the priest just insists on being a psychologist and spends more time giving advice than performing the sacrament of reconciliation. Anyway, a woman next to us joked “that man must have a lot of sins” and we all laughed and decided to go back to watch the service. Here are some pictures we took in the Church:

The priest gave a great homily. I don’t remember the contents of his speech very well, but I remember feeling moved by his words. I also remember how chilly it was at the top of the mountain; I felt shivers even beneath my black jacket. I also felt a little dizzy during the service, and with each breath I was reminded that my body would need some time to adjust to the high altitude and the lower levels of oxygen in the air. After the service ended we warmed up by drinking some canelazos (a warm cinnamon flavored Colombian drink that is popular in Bogotá) and eating some desserts in a shop next to the Church.

Afterward, we took some time to snap some more pictures at the top of the mountain. Two things really stand out when you’re that high up. The first is the expansive view of the city of Bogotá. When you look down from the mountaintop, the buildings below look like an endless stream of gray lego blocks that stretch to the ends of the Earth, far beyond the limits of what the naked eye can perceive, and right above them you see the clouds, seeming to hang lower than usual in the sky, making a kind of sandwich formation with the rectangular structures below. The sight evokes the sense of monotony that characterizes daily life for those who are constantly hustling in the city, and the contrast with the serenity of the mountain is calming and refreshing. Here is a picture I took of the landscape below:

Riding down in the cable car

After spending a few hours at the mountaintop and seeing the major sites, we were finally ready to head down and go back home. There was a very long line for the cable car and Fernando was running out of time to pick up his own car from the parking lot, so he quickly took the funicular back down and Marta and I waited another hour in line to take the cable car down.

The wait was well worth it. Heading down on the cable car you get an even more impressive view of the city and you feel a rush of adrenaline as the car glides down to the bottom of the mountain. There isn’t much room to move around with all the other passengers in the cable car, but if you manage to get a good spot near the front, you can capture a great view of the city. Here’s a video I took going from top to bottom in the cable car with Marta:

You can view all the pictures and videos I took on this trip at the following Google photos link: https://photos.app.goo.gl/cNa7NN5XdVmc6P1aA

16 thoughts on “Living with a Colombian family in Bogotá part 3: Monserrate”